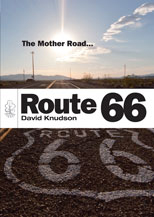 Begun in 1926 to connect Chicago to Los Angeles, Route 66 was the countrys first major east-west thoroughfare. By 1930 it was an important route for both truckers and travellers alike, and in 1939 it became known as The Mother Road thanks to John Steinbecks classic The Grapes of Wrath. Over the years, hundreds of thousands of Americans travelled this great road - from those heading west during the Great Depression to postwar families taking road trips across the country  but by the 1970s four-lane highways, expressways, and tollways had largely supplanted it, and Route 66 fell into disrepair. In this book, authority David Knudson traces the fascinating story of The Mother Road from origins to decline, including the roadside attractions and cottage industries it spawned and the efforts to save and restore it.