WILD ABOUT BRITAIN -BRADT
A LIFETIME OF AWARD-WINNING NATURE WRITING 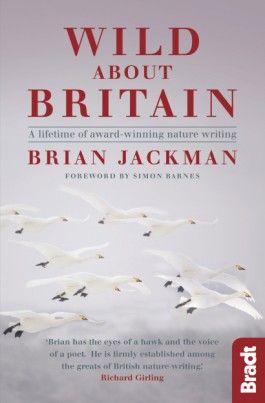 A new collection of award-winning journalist and author Brian Jackman's nature and travel writings from the past 40 years. This is a nationwide celebration of Britain's unspoiled coast and countryside, concentrating in particular on Britain's wildlife and the wild places in which its most spectacular species are found, but also touching on fishing, sailing and the way Britain's history has shaped the landscape. 'Wild about Britain is not a guidebook' says Brian Jackman. 'It's an extended love letter to the British countryside; a personal view covering more than four decades of travels in the wilder parts of Britain.'
Complementing Brian Jackman's writing are a small number of illustrations from Jonathan Truss, one of the UK's leading wildlife artists who has twice won the Frozen Planet category of the BBC Wildlife Artist of the Year competition.
What makes the British countryside so special is its chameleon quality - the way its character changes with every few miles. Sometimes it can change dramatically; elsewhere the landscape undergoes more subtle shifts; but every region has its own distinctive qualities and is possessed of its own special magic. Brian Jackman writes eloquently and evocatively, conjuring up the sights and sounds of everything from barnacle geese on the salt marsh of an Islay loch to star gazing on Exmoor, of a seascape of headlands, cliffs and wave-smashed rocks at Lands End, of eagles on the Ardnamurchan peninsula and the autumn rut in the New Forest. Ancient oaks, red kites, huge mirror carp, the oldest path in Britain and Border reivers are all included.
As a pioneer of eco-tourism, Brian Jackman has been writing on these subjects for 40 years, first as a travel writer for The Sunday Times and currently for The Daily Telegraph. Although more widely known for his knowledge of African wildlife and safaris - he is the author of The Marsh Lions and Savannah Diaries - it is his love of the British countryside that has brought him most of his awards. From Cornwall to Hermaness and from East Anglia to the Welsh Marches, Wild About Britain showcases Jackman's writing at its best.