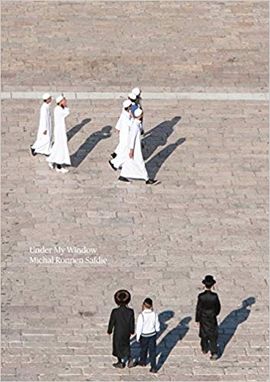 Jews, Muslims, Christians, believers, nonbelievers, residents, tourists, and so many others have flocked for millenia to the cultural richness that has always been Jerusalem. It is one of the worlds greatest crossroads showcasing the variety that is humanity. From her stunning viewpoint Michal Safdie invites you to see what she sees every day.

Perched up on a hill in the old city of Jerusalem, along the fragile border between the Jewish and Muslim Quarters, is the home of Michal Ronnen Safdie. Facing East, it overlooks the Western Wall precinct, the Dome of the Rock, and the Al-Aqsa mosque. To the North unfolds the Muslim Quarter with Mt. Scopus in the skyline; to the West, the Holy Sepulcher Church and the Christian Quarter.

Directly under her window, is a narrow alley, through which thousands of people pass every day. The alley is a crossroads. It is the path, of Jews residing in the Jewish Quarter and in the western part of the city, to the Western Wall. It is a passage for those entering the old city through Dung Gate on the south side, mostly Palestinians making their way to their workplaces, schools, markets and Holy Mosques in the old city. It is the route of Christians to the Holy Sepulcher.

The view from the window offers two contrasting perspectives.

Across toward the western Wall precinct, vast ceremonial spaces, and the silhouette of the Old City quarters. Directly below, in the alley and terraces, a great variety of people seeking the sacred as well as the morning and evening cycles of lifes routines.

The photographs capture private and personal moments, as well as ritual events side by side with seeming normality hinting at the social and political forces that shape life in Jerusalem.