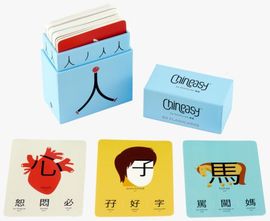 Learning Chinese is notoriously difficult and has long put off the most linguistically savvy Westerners... until now. Breaking down the Great Wall of language, ShaoLan Hsueh has unpicked Chinese characters and created a simple system for quickly understanding the basic building blocks of the written language. Working with renowned illustrator Noma Bar, she has developed a unique set of illustrations that are engaging and delightful, and offer a glimpse into the wonder of the Chinese language and culture.

This box of 60 flashcards teaches mainly traditional Chinese, which is the written language of Taiwan and Hong Kong. Each card has two sides: one depicts Chinese characters; the other shows its Chineasy illustration along with its English definition and its pinyin (indicating its pronunciation). Twenty-nine flashcards in this deck show a single building block with two or three of its corresponding compounds. The remaining cards show phrases. The set provides a quick and easy way to test recognition, from primary-school children to business people.