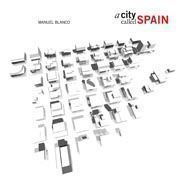 A City Called Spain is a book that reflects the landscape of Spanish contemporary architecture, constructing a large city with the most significant elements projected through a magnificent constellation of architects in the first decade of this century. It is an intergenerational story in which new studios and up-and-coming groups merge with the most established Spanish figures on the international scene. We have sought to draw a portrait of Spanish architecture, constructed by our architects on our own territory. To do so, we have placed only two conditions on the selection of works: That their teams be based in Spain, so they are studios that live and work in our cities. And that the works be built or designed and projected in Spain in this first decade of the century. We have created a city whose design coincides with the map of our geography. A topographic model abstracted from our orography, built with the maquettes, photos and drawings rest. Representations of buildings are situated on this large map of our peninsula, our islands and cities, corresponding to the real situation.