LIFE ALONG THE SILK ROAD 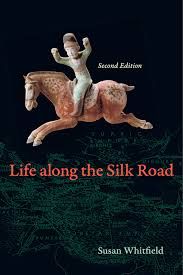 In this long-awaited second edition, Susan Whitfield broadens her exploration of the Silk Road and expands her rich and varied portrait of life along the great pre-modern trade routes of Eurasia. This new edition is comprehensively updated to support further understanding of themes relevant to global and comparative history and remains the only history of the Silk Road to reconstruct the route through the personal experiences of travelers.

In the first 1,000 years after Christ, merchants, missionaries, monks, mendicants, and military men traveled the vast network of Central Asian tracks that became known as the Silk Road. Whitfield recounts the lives of twelve individuals who lived at different times during this period, including two characters new to this edition: an African shipmaster and a Persian traveler and writer during the Arab caliphate. With these additional tales, Whitfield extends both geographical and chronological scope, bringing into view the maritime links across the Indian Ocean and depicting the network of north-south routes from the Baltic to the Gulf.

Throughout the narrative, Whitfield conveys a strong sense of what life was like for ordinary men and women on the Silk Road, the individuals usually forgotten to history. A work of great scholarship, Life along the Silk Road continues to be both accessible and entertaining.